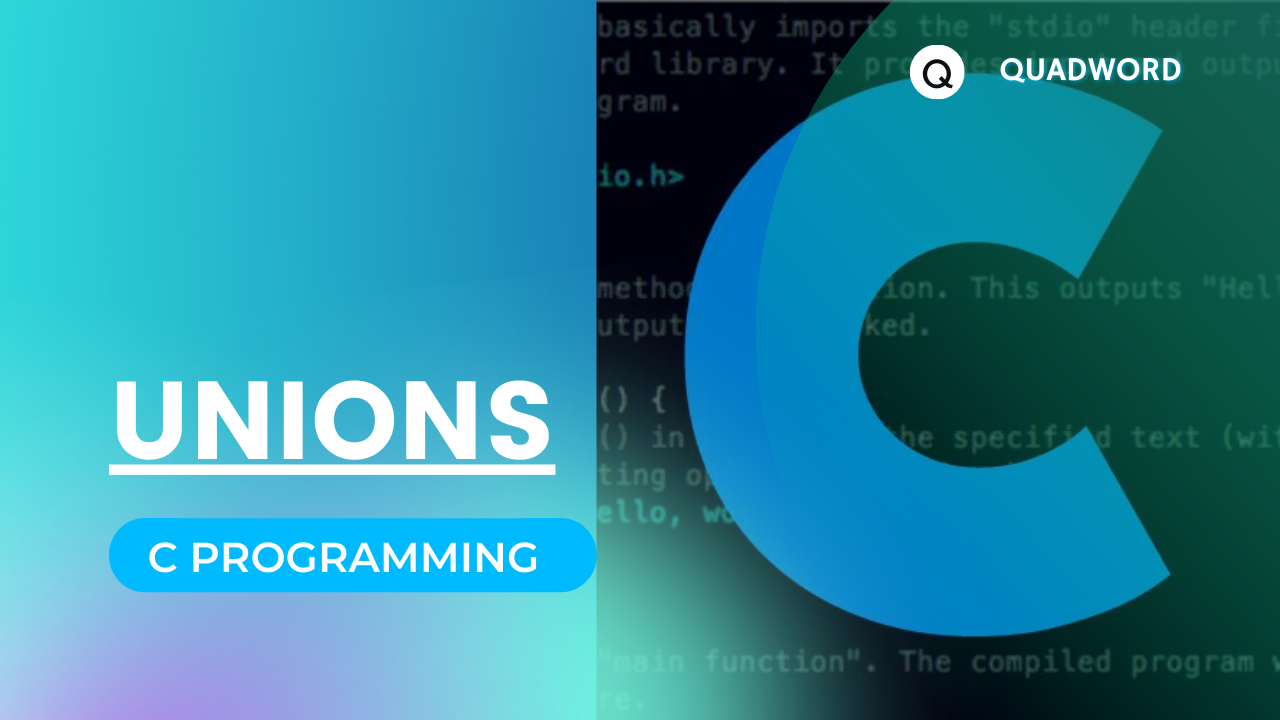 A union is a derived type (similar to a structure) with members that share the same storage space (sometimes the same type of construct needs different types of data). They are used mainly in advanced programming applications where it is necessary to store different types of data in the same storage area, they can be used to save space and for alternating data. A union does not waste storage on variables that are not being used.

Each element in a union is called "member". You can define a union with several members, but only one member can contain a value at any given time, so you can only access one member at a given time.

The members of a union can be of any datatype, in most cases, unions contain two or more datatypes and it is also your responsibility to ensure that the data in a union is referenced with the proper datatype - referencing data in a union with a variable of the wrong type is a logic error - it can cause your program to crash.

The operations that can be performed on a union are:

Unions are particularly useful in embedded programming situations where direct access to the hardware/memory is needed - because you are saving memory -. You could use a union to represent a table that stores a mixture of types in some order, you could create an array of unions that store equal-sized units, each of which can hold a variety of datatypes, a union could represent a file containing different record types, a network interface containing different request types, and so much more.

Memory Allocation for a Union

Although structs are similar to unions, the memory allocated for a union is quite different than for a struct. Every time you create an instance of a struct, the computer will lay out the fields in memory, one after the other, it allocates space for all its members separately. With a union, all the members have an offset of zero - there's one common storage space for all its members. A union is created with enough space for its largest field, the programmer then decides which value will be stored there. If you a union called quantity - for example -, with fields called count, weight and volume, whether you set the count, weight or volume field, the data will go into the same space in memory.

Let's suppose you want to keep track of a quantity of something, it might be a count, a weight or a volume. You could create a structure like this:

There are a few reasons why this is not a good idea:

A union should be used in this situations. You could specify something called quantity in a datatype, you can decide for each particular piece of data whether you are going to record a count, a weight or a volume against it.

Even though unions are similar to structures, they are used for entirely different situations:

The definition for a union, is identical to that of a structure, except the keyword union is used where the keyword struct is otherwise specified. A union has the general form:

The union tag is optional and each member definition is what we are used to do. Note that, as well as structures, you can specify one or more union variables before the semicolon but it's optional. The union definition is usually placed in a header and included in all source files that use the union type.

Let's look at an example:

A variable of type `_data' can store an integer, a floating-point number of a string of characters, a single variable (same memory location) can be used to store multiple types of data.

The memory occupied by a union will be large enough to hold the largest member of the union, any variable of type `_data' will occupy 20 bytes of memory, because this is the maximum space which can be occupied by a character string.

A union can be defined to contain as many members as you want, and they can be the members of a structure (they can even be arrays). Pointers to unions can also be declared, their syntax and rules for performing operations are the same as for structures.